How to Doodle a Hierarchy

How to Draw a Hierarchy (drawing tips)

If someone asked you to visualize a hierarchy, what would you draw? There are, of course, a number of ways we could visualize a hierarchy. Let’s look at one of them in this example. To begin with, let’s doodle a very simple icon that will represent the person on top of our hierarchy. Use a circle and three curved lines to draw this person icon near the top of your page.

Let’s now draw three smaller person icons below the larger icon you drew in step 1. Notice how these icons are spread out on the second line of our hierarchy.

Let’s now draw two even smaller person icons on the third line of our hierarchy. We are drawing smaller icons on each row because the smaller the icon the lower their position on the hierarchy. 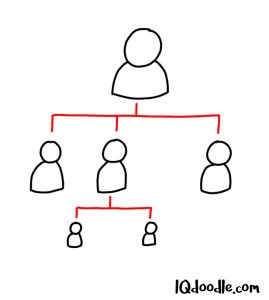 To show that this hierarchy of people is connected, draw several straight lines connecting the first row to the second row and then to the third row as shown in this example.

Recent how to doodle

Learn How To Doodle And Think Visually​
Insert your name and email below, then click on button to get started absolutely FREE!

Please check your email and confirm access to the Free Doodle Course.

If you don’t see the email, then please check your spam folder